Benchmark your SSD or hard disk speed 17 comments Create New Account
The following comments are owned by whoever posted them. This site is not responsible for what they say.
That second command isn't going to measure the read speed of your disk at all. It's reading from /dev/zero and writing to /dev/null; both are virtual devices. The first command already wrote out a temporary file, so just read from that: For a better view of disk performance, these commands should be run with varying block sizes (bs=) and the results plotted. This is left as an exercise for the reader.

Thanks. The submission had the same command twice, and as it was anonymous, I couldn't contact the poster. I did some Googling and found that second command. It seemed to work for me, but I've changed it in the hint.

The read speed test is flawed as written. Using /dev/zero as dd's input and output file doesn't hit the disk at all and will return ridiculous speeds like 15-20 GB/sec. The proper way to do the read test is to be to dd the tstfile created by the write benchmark into /dev/null (but only after clearing the RAM cache by using the 'purge' command).
This one-liner will test the write speed, clear the cache, properly test the read speed, and then remove tstfile to reclaim disk space:
dd if=/dev/zero bs=1024k of=tstfile count=1024 && purge && dd if=tstfile bs=1024k of=/dev/null count=1024 && rm tstfile

That's not really very fast for Thunderbolt.
I bought a Factory Refurb LaCie Little Big Drive for $229 (LaCie.com), removed the drives and the fan, and replaced the drives with a pair of SSDs. Using RAID0, I get around 450MB/s read and 360MB/s write speeds with every test I've tried. It's much faster than the internal SSD in my 2011 iMac.

Yes, the WD My Book is a bit slower, but it has no fan, which is a big plus. I wonder, though, if I should be getting higher speeds.. Oh, BTW, I'm not using RAID 0. I'm using mine as two 2 TB disks. That cuts the speed in half.
---
Mac OS X Hints editor - Macworld senior contributor
http://www.mcelhearn.com

The freeware Xbench's Disk Test offers a nice method for getting a few different kinds of disk benchmarks.

To obtain speed expressed in MB/sec, just append the following string to each one of the commands: i.e: and No need to google around.

Also keep in mind it's only as fast as your system's slowest bottleneck. I realized this myself when I recently upgraded my internal HDD to SSD. Obviously I didn't do proper research. I got a top of the line model and was expecting super fast speeds around 460MB/s on SATA-III, only to realize that my 2008 MBP only has SATA-I so I get about 120 MB/s.
Probably still faster than HDD, but I never did measure the speed before I upgraded.

You wouldn't save a great deal of money going sata-I or II ssd and this way you are future proof if you'll get a new mac.

That thought had occurred to me too. However if I was going to upgrade my Macbook Pro the new one would probably already have SSD and wouldn't be user-replaceable (like in the new Retina Display version)

…or you can just use a disk benchmarking tool like bonnie, which is available to be installed from MacPorts. 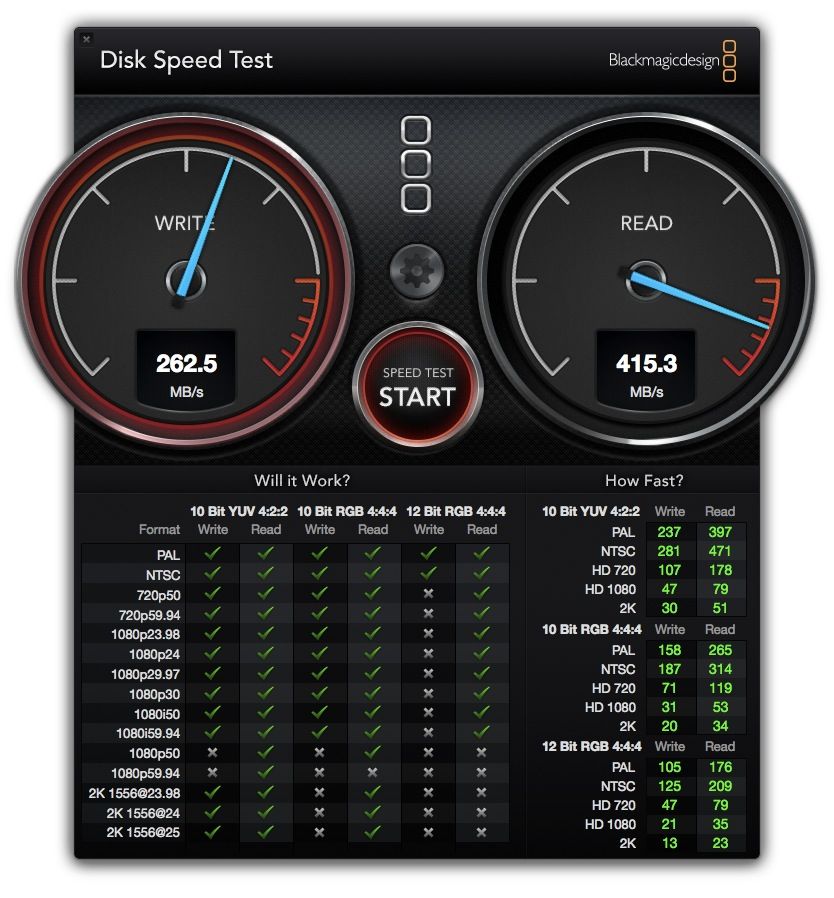 Would anyone be able to tell me how to use these commands to test my USB 3.0 drives or Thunderbolt drives?

Just a quick note on possibilities available to do some bench-marking of NAS performance. Quite often Blackmagic Disk Speed Test or Intel NAS Performance Toolkit are being used for this. But there are some problems with those: first one is nice and cool but for Mac only, second is good but no longer supported by Intel as it reached its EoL.

So if you look for the other options you may use the following:

U Disk Speed Test For Mac

I really liked this last option as it is portable and allowed me to do some quick tests against iSCSI target hosted on my Synology DS415+ (gigabit Ethernet connection; 1 drive only, no RAID, both data and header digests enabled). You may see test results below.

The same test run a bit later with both header and data digests disabled:

And here is the same test with digests disabled:

Of course this is quick and dirty measurement, but at least now I have some baseline and tool to measure how changes in my infrastructure or its configuration influence performance. For example I saw interesting reports that NFS share on Synology outperform iSCSI target (at least in terms of IOps), and in other source there were graphs showing negligible performance cost of iSCSI digests (alongside these graphs that material emphasized importance of data integrity you gain with digests), but it will be nice to verify all these claims.

UPDATE (20.03.2015): I did the same tests with disabled digests (see additional screenshots above), so performance cost is not entirely negligible, especially for read and for large chunks of date.