During the 1960s–1970s there were very few companies manufacturing suppressors, AKA silencers, in the US. Few/none were making them for the civilian market, which was virtually non-existent at that time. One of the few companies of that era was SIONICS which stood for “Studies in Operational Negation of Insurgency and Counter Subversion.” SIONICS’s business was mainly directed at governments—US and foreign.
SIONICS Incorporated

When Mitch WerBell III began his clandestine weapons business, he set up shop on his property near Powder Springs, Georgia in 1966; in 1967 the company incorporated. Initially, the product line consisted of suppressors for the US M14 and M16 rifles, later adding pistol and submachine gun suppressors. On December 21, 1970, SIONICS officially changed its name to the Military Armament Corporation also known as MAC.

Most of the suppressors that SIONICS/MAC designed and sold, used rubber discs called wipes to help suppress the muzzle report. The life expectancy was 200 rounds before the unit’s efficiency deteriorated and the wipes required replacement. A wipe replacement module was available as a separate item. Mitchell WerBell III’s achievements in suppressor design were often regarded as the most significant advancements since Hiram Maxim’s silencers were patented in 1909. Some of WerBell’s best-known suppressors were those made for the MAC submachine guns.

The M10 and M11 suppressors’ rear section had a core that was a simple tube with a series of holes; the area around the core was packed with shoestring eyelets. The front section had a simple baffle followed by two helicals—one right-hand spiral, the other left-hand—designed to slow down the escaping gases. A threaded plate was used to hold the parts and the wipe assembly (consisting of several urethane disks and spacers crimped into a module) in place. A few modern suppressor manufacturers that upgraded the MAC suppressors agree that the original rear section (with the eyelets) is effective. The front section with the helicals was the area in need of improvement. In 1972, the factory price for a MAC suppressor was $57.00. From 1971 to 1973 the Military Armament Corporation produced 1,138 .45-caliber suppressors, 1,659 9mm suppressors and 1,983 .380-caliber suppressors, plus a number of pre-production prototypes.

The SIONICS/Military Armament Corporation’s marketing strategy was to sell their weapons in substantial lots to governments and police agencies. The corporation was not interested in selling the guns piecemeal and discouraged sales to individuals.

Early in 1974, the United States Department of State placed an embargo on the export of sound suppressors to many third-world countries. In May of 1974, the US suspended all export license applications to “developing” nations involving suppressors and automatic weapons having threaded barrels for suppressors. The US Government ruling severely curtailed the foreign sales of MAC submachine guns.

The Military Armament Corporation sold to customers in over 50 foreign countries. Foreign sales nearly dried up completely when the sale of suppressors outside of the United States was banned. The US felt that any weapon that was fitted with a suppressor was an assassin’s tool and didn’t want any US firms offering such weapons overseas. The suppressor was what attracted many buyers to the M10 and M11 weapons; without it, the MACs were just another submachine gun, competing with many more practical designs.
MAC Bankruptcy

The full-size Model 10 submachine gun was not able to fit inside the operational briefcase when fitted with a suppressor. To address this problem, a shortened version of the suppressor was made. The suffix of the short suppressor’s serial numbers was the letter K representing Kurz or short. A total of 11 units were recorded in March 1982.

In July 1977, RPB began their 9mm two-stage suppressor production. Like their .45-caliber counterparts, the 9mm suppressors had a large diameter primary tube and a smaller diameter second tube. A total of 796 9mm suppressors were made when production ended in 1982.
RPB made 11 9mm “briefcase” suppressors on March 3, 1982, which had a shorter overall length. This was to allow a full-size Model 10 to fit into the operational briefcase with a suppressor attached.

During 1983, SWD announced their new High Efficiency (H.E.) sound suppressor line specifically designed for their recently introduced M11/Nine 9mm submachine gun. The SWD H.E. design had a tube that was the same diameter of 1.75 inches for its entire length of 11.625 inches, unlike the earlier two-stage MAC designs where the primary stage was larger in diameter. Advertised as “quieter” the SWD H.E. suppressor used three high-density copper mesh cylinders, separated by triangular baffles, in place of the SIONICS/MAC spiral-type baffles and eyelets. The High Efficiency suppressor would also thread onto the 9mm Model 10 and was available for $140.75 postpaid. SWD’s 9mm H.E. suppressor production began in June 1983, ending January 1989; during that time 1,409 H.E. suppressors were produced. SWD also sold suppressor internal replacement parts and wipes for all of the MAC suppressor models.

Around 1980, Dr. Phil Dater of Gemtech fame, designed a wipeless end cap called the MAC-END for the MAC-type suppressors. A few years later he offered a complete “enhancement” kit of baffles and spacers to use along with the MAC-END. The ATF ruling that made possession of suppressor parts a felony ended the availability of the enhancement kits. In 1981, Dr. Dater designed the “Superwipe,” which was a 4-inch long tube with a coupler to thread into the existing M10 suppressor, a support for some fiberglass insulation and a wipeless end cap. The Superwipe would simply screw in in place of the existing end cap. Subjectively, it was a further improvement, but the suppressor was overly long. Drawings were submitted to the Tech Branch of the BATF. The response was that it could be adapted to a firearm by itself, and because of its design, it would be a suppressor, thus the production of the Superwipe was denied.

While Ingram’s Model 10 and 11 submachine guns came from the factory suppressor-ready, the weapons have been largely ignored by modern suppressor manufacturers. One of the first non-MAC factory suppressors was designed by Phil Dater and Lynn McWilliams during 1986. Designated as the M10A3 suppressor, they were manufactured by AWC of Houston, Texas. Basically, they followed the original MAC design but improved it by replacing the eyelets in the primary tube with steel mesh and the helicals in the secondary tube with stainless steel baffles. The module containing the rubber wipes was replaced by a wipeless MAC-END. The M10A3 was approximately 2-inches longer than the original MAC cans. The M10A3 was available in 9mm or .45 caliber. There was also a .380-caliber model designated as the M11A3. However, the problem of the suppressor coming loose because of the coarse barrel threads remained. The M10A3 suppressor was superseded by the legendary MK9 suppressor configured for the MACs.
Updating to Modern Baffles

Suppressors were a popular option on the MAC submachine guns. The 1970s-era suppressors are now quite dated and have been replaced by smaller and lighter wipeless designs. However, many enthusiasts like the “old school” look of the big original MAC suppressors. Often a MAC submachine gun was sold with a serial-number matching suppressor. Many of the matching-number suppressors were separated when a submachine gun was sold to an individual who did not want to pay an additional $200 transfer tax for an outdated suppressor. One drawback to the early MAC cans was their wipes, which only lasted a few hundred rounds before replacement was required to restore the can’s effectiveness. The wipes not only required periodic replacement but affected accuracy. The basic issue was that anything that touched the bullet once it left the rifling would deflect it and open the shot group. While not an issue at a range of 10-15 feet, at 50 or more feet accuracy deteriorated quickly.

Fully aware of the old MAC suppressors’ renewed popularity, modern suppressor manufacturers like Tom Bowers now offer a service to update the old cans by replacing the helicals with modern baffles, eliminating the old wipe system. Bowers, like most of the others who update the old cans, feel that the original eyelets in the first stage work quite well and leave them intact.
Recommend reading:The MAC Man: Gordon B. Ingram and His Submachine Guns, available from Chipotle Publishing, LLC at www.chipotlepublishing.com.

Comments have not been generated for this article. 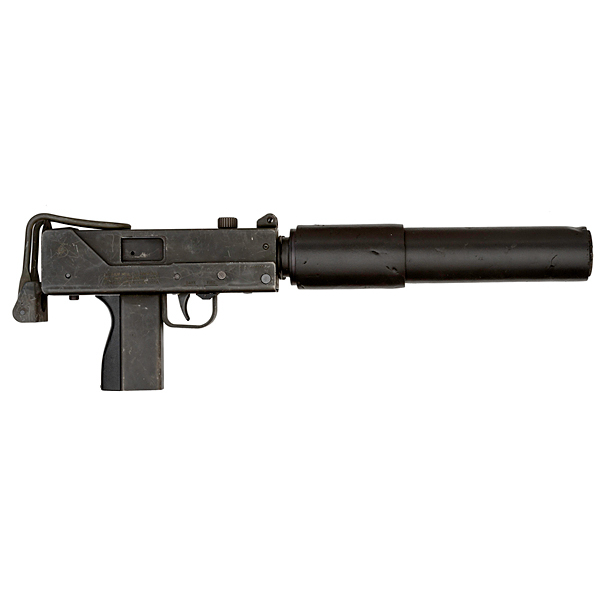 For roughly a 20-year period from the mid-1970s to the mid-’90s the MAC 10 for sale submachine gun was everywhere. At least that’s what you might think if your only exposure to the weapon is action films and T.V. shows from the era. The compact MAC-10 first registered in America’s collective imagination when John Wayne wielded one. This, with lethal prowess in the 1974 police thriller McQ.

After that, the MAC 10 for sale became a standard prop gun. The MAC-10’s manufacturer, Military Armament Corporation, had hoped to become a leader in the growing market for military and police submachine guns. However, despite the gun’s popularity among movie producers, it never really caught on with professional operators. A handful of forces and agencies gave the MAC-10 a try.

The MAC 10 for sale, however, maintained its iconic status in American pop culture through the 1990s. Even though street gangs and drug cartels were, by then, its primary users. The final model is an unrefined, boxy little gun the size of a pistol. Depending on who you ask, the MAC-10 is, technically speaking, a machine pistol rather than a submachine gun.

Measuring only 267-millimeters in length with its wire stock collapsed, the MAC 10 for sale is easy to conceal and handy in close-quarters combat. attributes that could be particularly appealing to special operators and law enforcement. Also, the grip is centered in the body of the gun to provide some balance. The gun was originally available in two calibers — .45 ACP and nine-by-19 millimeter. A 30- or 32-round magazine, depending on the caliber, inserts into the base of the grip. Later models and variants accepted .380- and even .22-caliber ammunition.

The gun originally operated with an open bolt system with a cocking handle on the top of the upper receiver. The open-bolt design dictated the seemingly odd placement of the cocking handle, which made it impossible to add an optics rail to the weapon. Not that a notorious lead-spray like the MAC-10 would benefit from optics. Closed-bolt models of the mac 10 for sale, with cocking handles on the side, came later. The stubby barrel has trademark grooves at its base near the receiver so the user can twist on a suppressor.

The MAC 10 for sale is not without its charms. Its simple but sturdy design makes it reliable and durable. It can also throw a lot of lead — in a hurry. Both the .45-caliber and nine-millimeter versions fire at a minimum cyclical rate of 950 rounds per minute. By comparison, the M-16 and AK-47 have cyclic rates of approximately 800 rounds per minute. Durability and a high rate-of-fire are admirable qualities in a firearm. But a weapon also needs to be functional and, hopefully, versatile. It has to perform in the field, preferably in multiple scenarios.

The suppressor potentially made the weapon more attractive to special operators by adding stability and cutting down on muzzle report. Despite possible issues with the MAC-10’s accuracy, there was still some interest in the weapon among military and police forces. When Ingram’s MAC 10 for sale caught the attention of U.S. military officials, he began looking for investors to fund mass production of the weapon, which led to the formation of the Military Armament Corporation.

How To Make A Silencer

Combining Military Armament Corporation’s acronym MAC with the Ingram’s “Model-10” designation for the gun gave the MAC-10 its popular name.